Just one more in the past week. 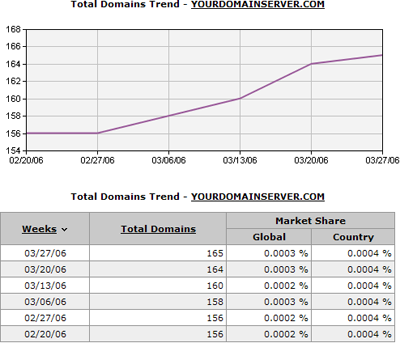 Thanks to a third party monitoring service, they have been monitoring the number of domains on my server. 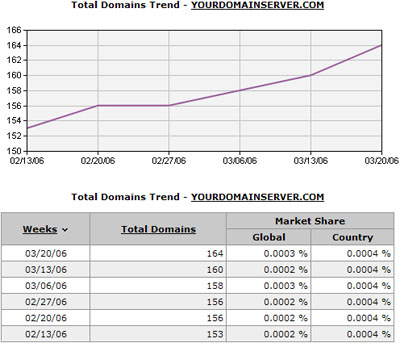 Nice trend for the past 6 weeks. And yes! I now host 0.0003% of the worlds domains! Yes, I am on my way to global domination! Now if I can just reach 0.0004% next week, and maintain that rate, I will dominate the world, hosting every domain on the planet (assuming the domains do not increase) after 20,833 years and 4 months! Hmmm sounds like a realistic target, now, I need to search online for an immortality potion, there should be one on eBay based on their ads after doing a search on Google.

If you did not watch the video yet and just decided to scroll down, here is more information about it:

Dylan Avery has created a documentary about the 9-11 tragedy and has documented everything very well. I still give the benefit of the doubt, his documentary video may be questionable, but the news and press releases with the known and accepted truth are also questionable. True or not, I believe people should see this video and give it to the viewer to decide for the video about the September 11, 2001 tragedy on four airplane crashes at the World Trade Center in New York, the Pentagon and the failed airplane crash heading for the White House.

A few points described well in this video:

I know that it is hard to imagine that our own government would murder almost 3,000 innocent people.
But once you begin to accept that possibility, you can no longer go back to the 19 Arabs, or melting trusses or letâ€™s roll. The official story becomes the conspiracy theory. America has been hijacked, not by Al-Qaeda, not by Osama Bin Laden, but by a group of tyrants ready and willing to do whatever it takes to keep their stranglehold on this country. So what are we going to do about it? Are we going to sit down and take it? Or are we going to stand up and fight for what ever little freedoms we have left? The story of flight 93 is a perfect metaphor for the state of this country. A group of heroes willing to sacrifice themselves for the good of the nation. Voted to take matters into their own hands, no matter the consequences. The time has come. Letâ€™s roll.

Disclaimer: This blog post does not neccessarily voice out the views of the owner of this blog. This blog did not verify any truthfullness of this blog post and advises the readers of this blog and viewers of this video that is it the readerâ€™s/viewerâ€™s discretion whether or not to believe in this blog post. Which is the same with religion, what your teachers teach you in school, what your parents told you, what you read in books, and what you hear in a network marketing seminar. Think twice and use Rene Descartesâ€™ rule of doubting everyting before believing to know the truth. Sabi nga ng Grin Department, Isipin ng sampung beses, count to 1, count to 2, count 3â€¦ count to 10, kantuten.

This blog post is a reposting of the same article I posted on my other blog. The latest news is I also bought myself a copy of the video, both first and second editions from Loose Change 911 Information. Once I receive the CD in the mail, I will post about the second edition.

I also work in a company that does websites for Doctors, Dentist and Lawyers. And many of the doctor websites are for LASIK doctors. And the image below is an example of a photo of a model not to use on a LASIK website. 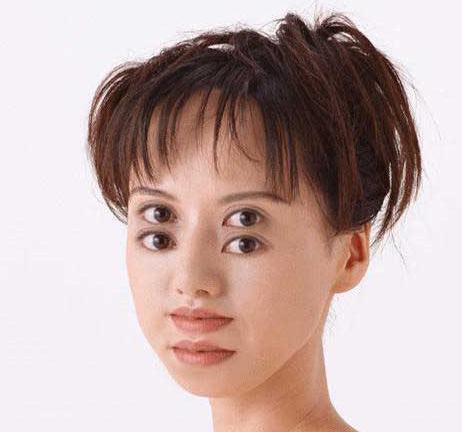 This involves a little bit of math.

I wanted to buy a pair of shoes that cost $17, but I had no money. I then borrowed $10 from Juan Dela Cruz and another $10 from John Doe.

Big Screen Version – Some dude who put together various newscaster videos from FoxNews with some background beat and DJ magic. Watch the video below, it’s cool.


If you listen well to the video, I think there is a line saying “Do you have nightmares to the Firefox?” Is this a message for Microsoft Internet Explorer, giving it a Firefox nightmare? Hahaha.

Posted video for DJ Happee’s last day at work (as a web designer at a web company). Good luck and have a nice time with your new web job, as well as your 11 year DJ job of course.

Yeah, the default email program on my Treo 600 doesn’t work. Good thing there is an alternative solution. And even runs better than the default email program. Very light weight, consumes less resources, runs faster. I like it. Read about the MsgAgent email software for the Palm Treo 600 and Palm Treo 650. I think this does not work on the Palm Treo 700 because that is running on Windows already and not on Palm OS.

When you have a family and you supposed not always rely everything on your wife for things to do at home. And somethings are really men’s jobs especially when it comes to task related to fixing things that require a bit of physical effort. I am not living with my wife right now, but I always make it a point that when I am home with her, I try to fix everything I can so she does not have to do them.

I know several people that may disagreed with me. I think it all depends on their culture, their upbringing. There are some guys that want to be served everything because he is king. There are some that will do it, to avoid the nagging but does not want to do it.

Well if you are splitting task and was given the chance to choose from either folding clothes, washing the dishes, cleaning the bathroom, I suggest do folding the clothes and the video below will get you done in no time. Then you can spend the rest of the time watching TV on your favorite sports channel. (Which is not my attitude/behavior, since I like helping my wife in everything. And I know she knows that.)

Have you heard about Flight Q33 that it was one of the 9-11 flights that went into the World Trade Center? And then you change the font of Q33 NY to Wingdings, it shows a message of what happened in the last September 11 tragedy in New York. So is this Q33 NY thing true or not? Well there was really no Q33 flight going to NY at all.

But the Q33 NY flight was made so popular by some circulated email. Along with other numbers trying to look for coincidences in the event.

To know more about this email circulating with the Q33 NY thing, go to the article on ActionOnline.biz with the story about the email that has been circulating that has the Q33 NY.

Jamie is 3 years old and she can’t read but can recognize a few words. Since she knows how to use the computer running on Windows, she can do basic stuff like turning on, turning off, opening several application, browsing going to Barbie.com, Disney playhouse and opening Yahoo Messenger. She knows my name on Yahoo Messenger and uses my wife account or whoever’s account is online that time.

And sometimes I am already saying some stuff thinking my wife is on the other side, agreeing to what I am saying and it is just Jamie on the other end saying “ok” even if she can’t read anything yet.