Spent half-day at work as many other employees did and others were simply not there that Friday. Mainly for a longer weekend vacation, but for me it was because I needed to receive this shipment at home that is 397 pounds all together. And they did not fit the apartment complex door and was left in the parking lot and I needed to go back and forth bringing each shipment in. 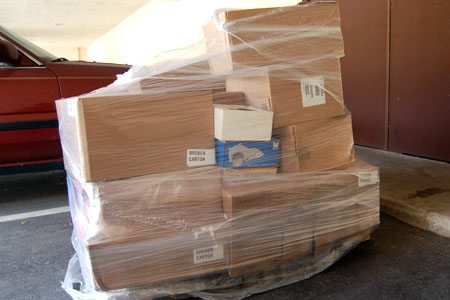 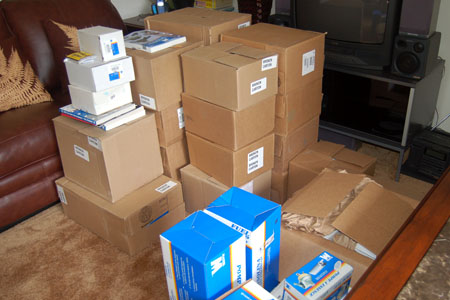 Some boxes were real heavy. But it was still good exercise. 😛

I just got a new table, and I am not done fixing everything yet. I bought the same table I have at work. Not because I love that table, but I found that it is the cheapest of it’s kind. But instead of the gray finish, I for the wooden finish. 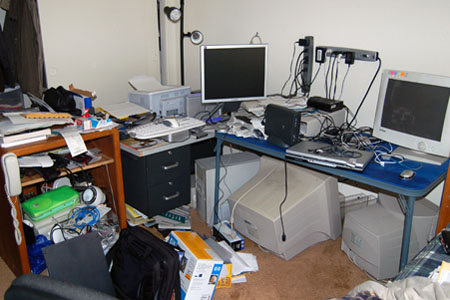 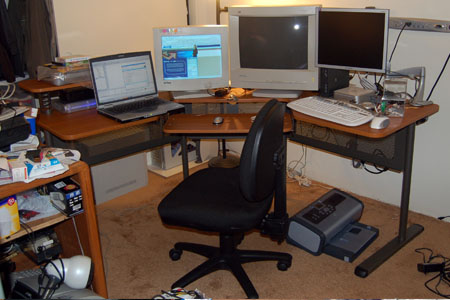 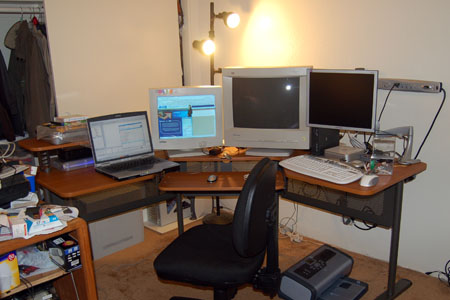 But not everything is working yet, the monitor on is set to extended desktop on my Laptop. The 21″ monitor will be for my desktop that I have not reformatted yet eversince the hard disk got burned during the San Diego September 2005 Lightning Storm. The panel monitor with the mounting arm is for the Mac Mini that I still need to plug together. 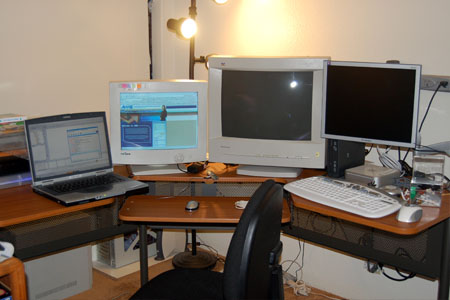 Not everything is fixed yet

Aside from not being done with the computers, I got…

…junk on the bed… 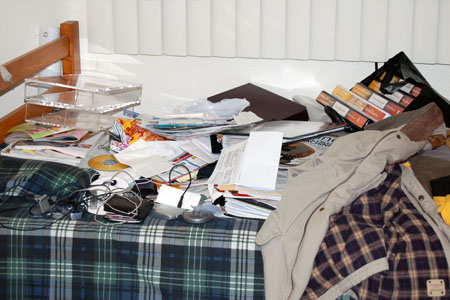 …junk on the floor… 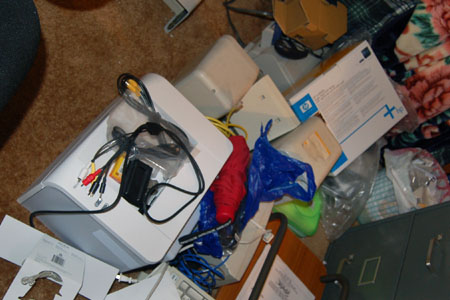 …junk on my end table… 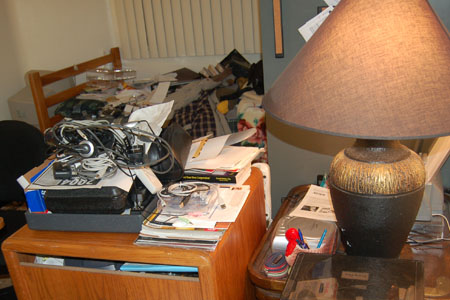 And tons of projects to finish. 🙁

But they will all be done.

I have showed Gema the benefits of WordPress and why not have her own domain than use from Typepad domain and save more in the process?

I gave her an ideal hosting plan, with a matching good domain name service, and tried converting her Typepad blog to WordPress, and I had no problems at all!

Listen to the CSS Song here.

After browsing around, I just landed at the website of Brown College in Altanta, Georgia for some reason. And I got to this page… 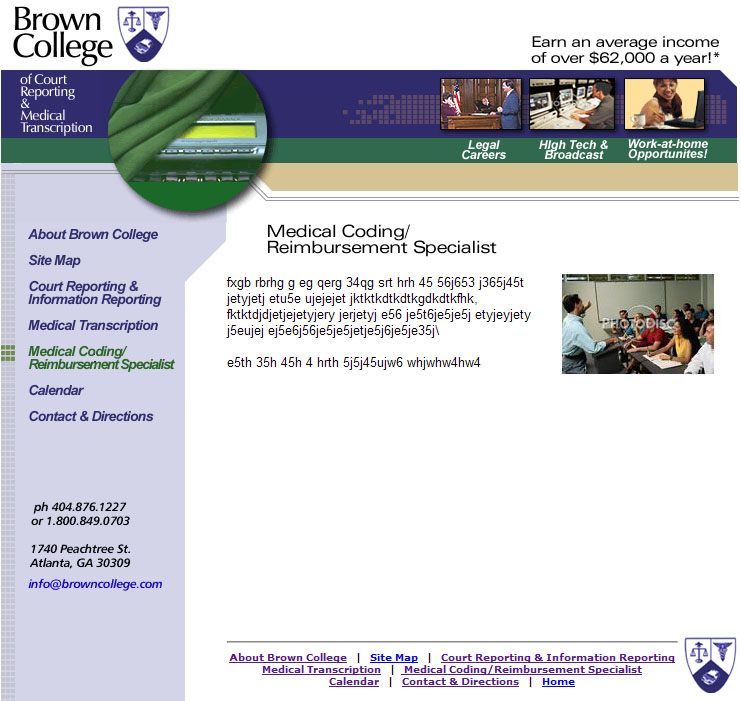 This is a Medical Transcription course at Brown College and they teach Medical Coding. Look at the code, this looks real hardcore coding right there. Some kind of encryption algorithm they teach for their transcription. And did you know it is legally fine to use stock photos even if you did not buy them? The only requirement is you leave their watermark on the photo. A closer view below.

Very high-tech education on encryption algorithms, this must be a very good school! Check the page on Brown College now before they change the page. 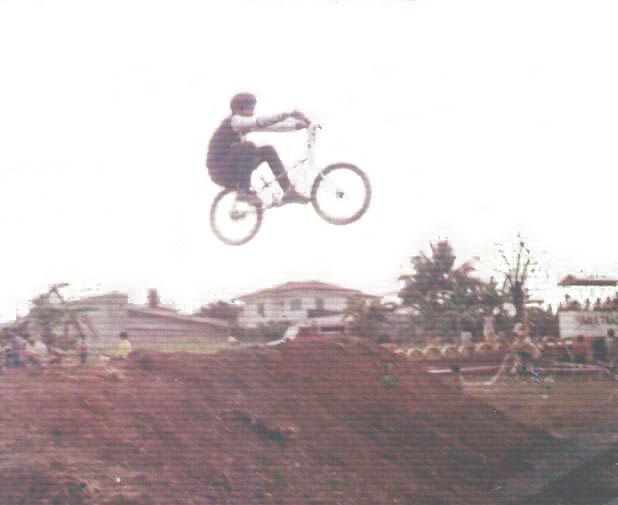 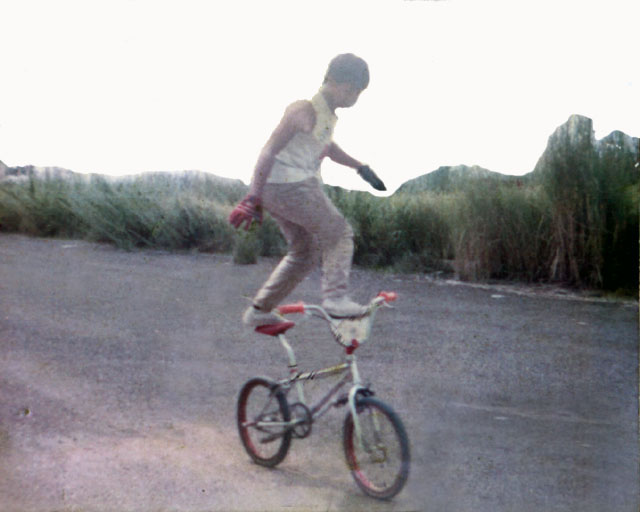 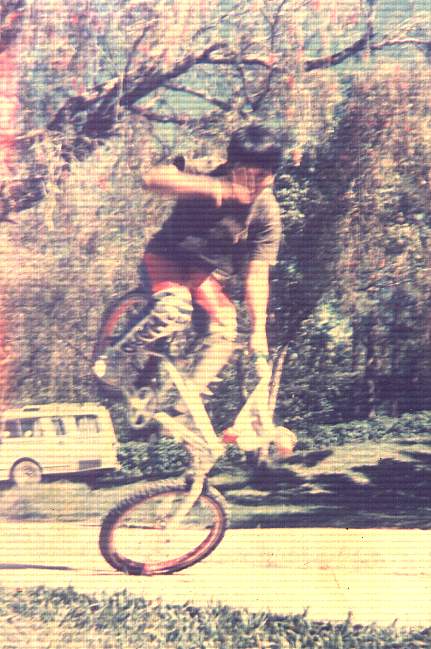 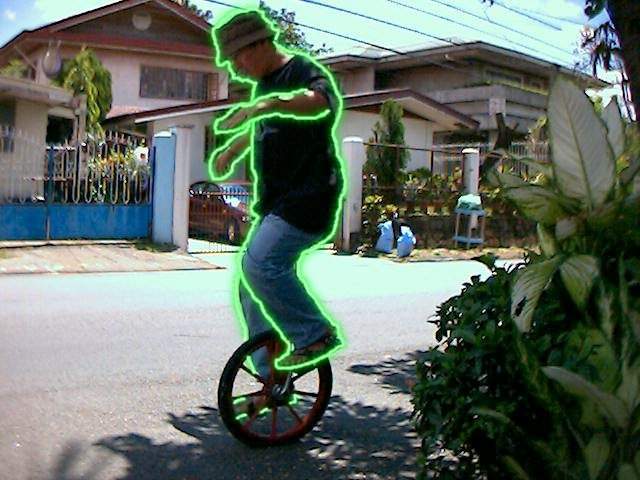 Now I feel like immortalizing online my old pictures too! And I will still try to get new pictures, if given the time at the Clairemont Skatepark and might ask John a favor to take the photos.

Today is Cinco de Mayo, here in San Diego is it also party time in some areas. And our company president, Robert C. Silkey of Einstein Industries may this day a special day to all employees. He opened up what he calls it a town hall meeting. Where we were all in the parking lot and talked about the future plans and present actions being taken by the company. He also answered all annonymous emails from the anonymous board and takled them very well. I believe he has please everyone and seemed honest about what can be done, what cannot be done and what will be done at Einstein Industries, Inc.

This meeting ended early as everyone was invited to the Cinco de Mayo party at his house. And after printing out some maps, and stayed for a while to wait for Mook work on some Flash stuff, we drove away heading to Robert’s place as Mook followed where I went. I rarely get lost with a map, but that day, I got lost a lot of times and I think I was passing the streets I need to turn in to. Maybe it was also because I was also keeping an eye on Mook if he was also still following behind, while I also paid attention to where we were going and I did not seem to see the right streets i needed to turn to.

After driving and we stopped for a second at 7-11, and asked the UPS guy that was there on how to get to Robert’s place, it was already 4pm and Mook also needed to pick up his wife after work. And I felt sorry for him and guilty since he was following me and I got lost, and so we both got lost. And we decided that I will go to the party and he will go and pick up his wife. Mook told me to tell hi to everyone and enjoy myself telling the story.

That time we were past Sea World already, and we drove following the instructions that I still can remember given by the UPS guy. Sea World Drive, just go straight, you will go over the bridge going over the 5 highway and once you get down, that is Morena Boulevard. I got to Morena without any problem, now, as I drove along Morena, I just didn’t see where I had to turn and I got to a point where I drove until it seemed the end and drove back. I noticed Morena and West Morena and I just gave up using too much gas already.

Sorry Mook also for the gas and time. If ever you were late for picking up your wife, tell her sorry also.

Well for me, it was another tour of San Diego.

Canon in D has been used many times as I have mention in my previous post. And good friend of mine Louie Morales has decided to send me an mp3 of the song but it does not seem to be complete, but good enough. And I did not listen to it right away since I though I would feel like I have listened to this song to much already that any version may not sound that impressive compared to the first time I heard the song Canon in D by Pachelbel. But this acapella version of Pachelbel’s Canon in D is just different that it still find this song very nice to listen to over and over.

Raredog, jumble that up, and you can form the real name of Geri. Geri goes a long way back in 1989 I remember. During those days he was riding a BMX with a small plastic skull above the handle post. I was a BMX quarterpipe newbie that time and just barely goes over the coping. As my front wheel passes the top of the ramp, I turn back in. And Raredog used to fly above and during those years when backflips, flairs, tailwhip airs were not yet invented, Raredog was pulling of X-ups, Candybars, common one-footers and other tricks that are classics today. And since we are from the Philippines, we do not really think of safety that much, so we have minimal gears, most of the time without helmets. For some reason, I think even i considered knee pads and shin guards more important than a helmet since pedal grinds on your shins are really painful.

1989, such a long time, I do not ride the way I used to, and Raredog is all into scooters. Now he’s a blogger too! He has a new website.

Online friend of mine, Mike Lopez, are in a race. A race where only the two of us are in the contest where we are against each other. We have both been playing around with SEO and I can say I have been doing SEO for more than year, but there is still so much to learn. We are both beginners in the affiliate marketing/ad publishing arena of the Internet and everyday is like continuous learning try new tricks everyday.

Right now we are in a race to the first to earn a total of $1 Million US Dollars! Hahahaha, a large amount, and only through 1 type of revenue stream. We are both like earning only less than $30/month, through this new revenue stream, but seem both optimistic on winning the race. Maybe because we both think that it is possible… and we both want to prove it is.

Problem is, I got to finish a client site real quick first, then go to back to the viral site I am working on. But that gives another day for Mike to gain more lead. Hopefully the bots don’t crawl on him yet and give me more time to catch up later. LOLz!