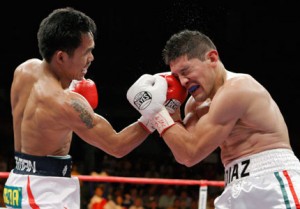 A lot of hook – upper cut, jab – upper cut, body shots – upper cut combinations clearly getting Diaz using excellent hand speed. But this round Diaz gets to sneak in a few body shots to Manny Pacquoi Pacquiao but do not seem to give any worries to the Filipino boxer.

Pacquiao vs Diaz Round 4

Diaz gains a nose cut as aside from the worsening eye cut above the right eye. The referee briefly brought Diaz to the doctors corner but is quickly assessed he is still in good condition to fight. Again Manny Pacquio still outpunching with fast hand speed.

Diaz slowed down and blocks well but Manny Pacqiuao still using speed getting through the blocks. Diaz attempts his own flurry but seem to be useless. Diaz’ coach recommends to put his head under Manny’s Pacquaio chest and move forward, and that will not get hit that much.

By now the head cut was confirmed to be due to an unintentional head butt but by this round, the cut just gets more swollen.

Pacquiao vs Diaz Round 5

Manny Pacqiuo Pacquiao still not slowing down in round 5, as Diaz does not seem to speed up and seemed slowing down, and more blood coming from above David’s right eye. A lot of Manny’s Pacquioa left cross and upper cuts were hitting Diaz solidly.

After the round David’s coach recommends Diaz to stays lower, punch in tighter.

Pacquiao vs Diaz Round 6

Diaz tried to be more aggressive and the round starts with a litter slower space. Again the referee briefly lets the doctors check out Diaz’ cuts and doctors still approve him to continue fighting.

Round ends with a touch gloves of both fighters, a true sign of sportsmanship from the Mexican Diaz and Filipino Manny Pacquoa Pacquiao.

Pacquiao vs Diaz Round 7

Round 7 looks the same, like the other rounds. Manny Pacqauo Pacquiao is faster than Diaz. And the pattern seems to be the same in the rounds to come. And it seems Diaz does not have what it takes to beat Manny Paqiuao aka Pacman.

Freddie Roach recommends the same advise after the round. Stay away from the inside, continue to work on the uppercut. And Manny’s Paquaio corner also gets the advise: ‘wag buhos, timing dapat. (don’t pour it all out, timing is needed.)

Pacquiao vs Diaz Round 8

Manny Paquioa still not slowing down at round 8. Considering Manny Pacqioa Pacquiao had to gain more weight for this division, he seemed to have no problems with his speed with the extra pounds on. By now, commentators are convinced that it’s a KO or a stop the fight that will surely come, just a matter of time.

Coach advice to Diaz, hand inside near chin. Work the inside. Got to pick it up.

Pacquiao vs Diaz Round 9

Commentators believe if it was Pacmans title at stake, the fight would have been stopped earlier. But it’s Diaz’ title at stake. Diaz showing good bravery, but bravery can’t do much to his fighting. In round 9 he receives too much of Pacquiao’s left cross and gets KO’d in round 9 and the fight is stopped. Manny “Pacman” Pacqaio Pacquiao wins over David Diaz in Round 9 by a Technical Knockout (TKO).