Is this a Vacation?

My Vacation: Going back to the Philippines, and attending an SEO Contest awarding and an excellent time to be with my family. And… design projects, development projects, SEO projects, hosting accounts, SEO contest, rooms a mess, legal stuff, quality family time, maybe seminars/speaking engagements coming up, arrggg. Maybe it may not feel like a vacation. But aside from attending the SEO contest awarding, being with my family is the best, nothing beats that.

I joined an SEO contest, and I am just barely reaching page 1. The contest ends on Sept. 30 and I think I just need the September Google dance and I will be back on page 1. My cache is not updating on Google even is Googlebot keeps passing by. More details about the Isulong SEOph contest here.

You can enter up to 5 websites and see the graph of their traffic based on Alexa superimposed over each other. Pretty cool. Check the traffic of my entries in the Isulong SEOph contest compared to my blog ActionOnline.biz as a control.

A lot of people say working for the government is well paid and has many benefits. If you are interested in getting one, there are tons of opportunities you can find online. Like the listings below, some are a bit redundant, but try searching yourself. Try in the job you like and choose the state where you want to work in.

Yes, if you found out somewhere that I am one of the new writers of an SEO blog, oh no… and you are looking at my personal crap blog. *lol* My main blog is still ActionOnline.biz, but of course my name on that blog is still my name. Hmmm… Maybe I need an alias like the others, but I think it’s too late. I should have made some name for some branding effect. Oh well, what the heck. I don’t care. I still like my blog as it is, but if you are looking for SEO topics I post… sorry most of them are not here. You will probably find them in ActionOnline.biz or Isulong SEOph.

Actually I like watching all kinds of car racing, from F1, to Rally, to NASCAR, I must say I am a bit bored with Indy 500 since it keeps going in the same direction in an oval. At least NASCAR has some lefts and rights and not only left. Not that I am saying NASCAR is better than Indy 500. It is just my personally preference.

Hmmm, I do not clean my car that often as some other people do. And actually a dirty car can be cool. Here is a dirty van with some added coolness to the dirtyness. 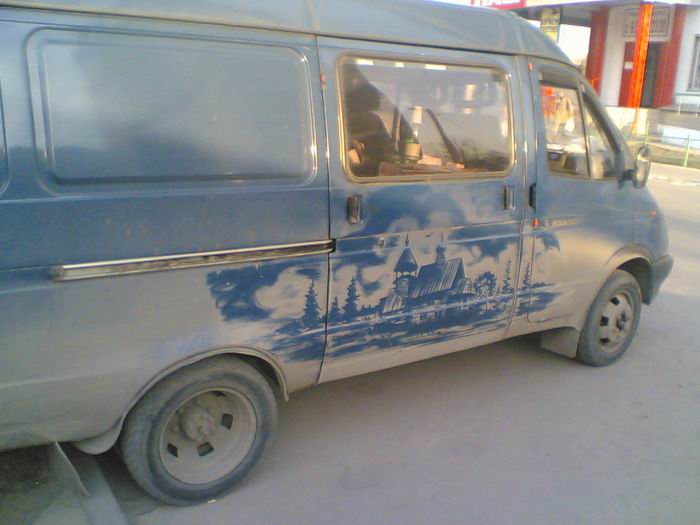 My wife once had UTI, which can be brought about through Cystitis. She was really in pain. What she was feeling was having a hard time urinating and she always had to urinate often which was always painful. With this kind of feeling she started to have a high fever as well and was getting the chills because of the pain in the pelvic area.

Although there are several types of Cystitis, the most common cause is by the bacteria Escherichia coli, commonly known as E. Coli, that when found in the lower gastrointestinal tract, this is where the Cystitis problem starts. Treatment always recommends doctor attention and in most cases of bacterial infection, an antibiotic is prescribed. Although there has been several side effects known with the use of antibiotics, there are some recommended alternatives such as D-Mannose.

There is natural and synthetic D-Mannose and D-Mannose can be naturally found with simple sugar since this is a stereoisomer of Glucose and can be found in small quantities in fruits like cranberries. Although our bodies had D-Mannose, this is abundantly excreted into urine. This is know to work well with bladder infections such as Cystitis, as this can flush out E.Coli. If I have know this when my wife had UTI, I would have recommended this treatment to augment her antibiotic medication. Itâ€™s safe and has no known side-effects. And D-Mannose can easily be purchased online.

Disclaimer: I am no doctor and if ever you have Cystitis, UTI or any type of bladder infection, don’t just listen to my advice and take D-Mannose. Consult your doctor and seek their advice.

I never get tired of the XGames, BMX, Skateboard, Inline Skates, and Moto-X are my favorites to watch. I like the sport itself since this is one of the sports where competitors love to cheer for their top competitors. They get the natural high for each others’ tough tricks done.

Samuel L. Jackson really got pissed with the m****** f****** snakes on a plane. He got so mad he made holes in the plane to make all snakes fly out and fall to do some skydiving. And what is this I am hearing? Online Poker addicts on the Mac are complaining they can play Poker on a Mac? Totally wrong! Check what Samuel L. Jackson has to say about that with PokerOnaMac.com.